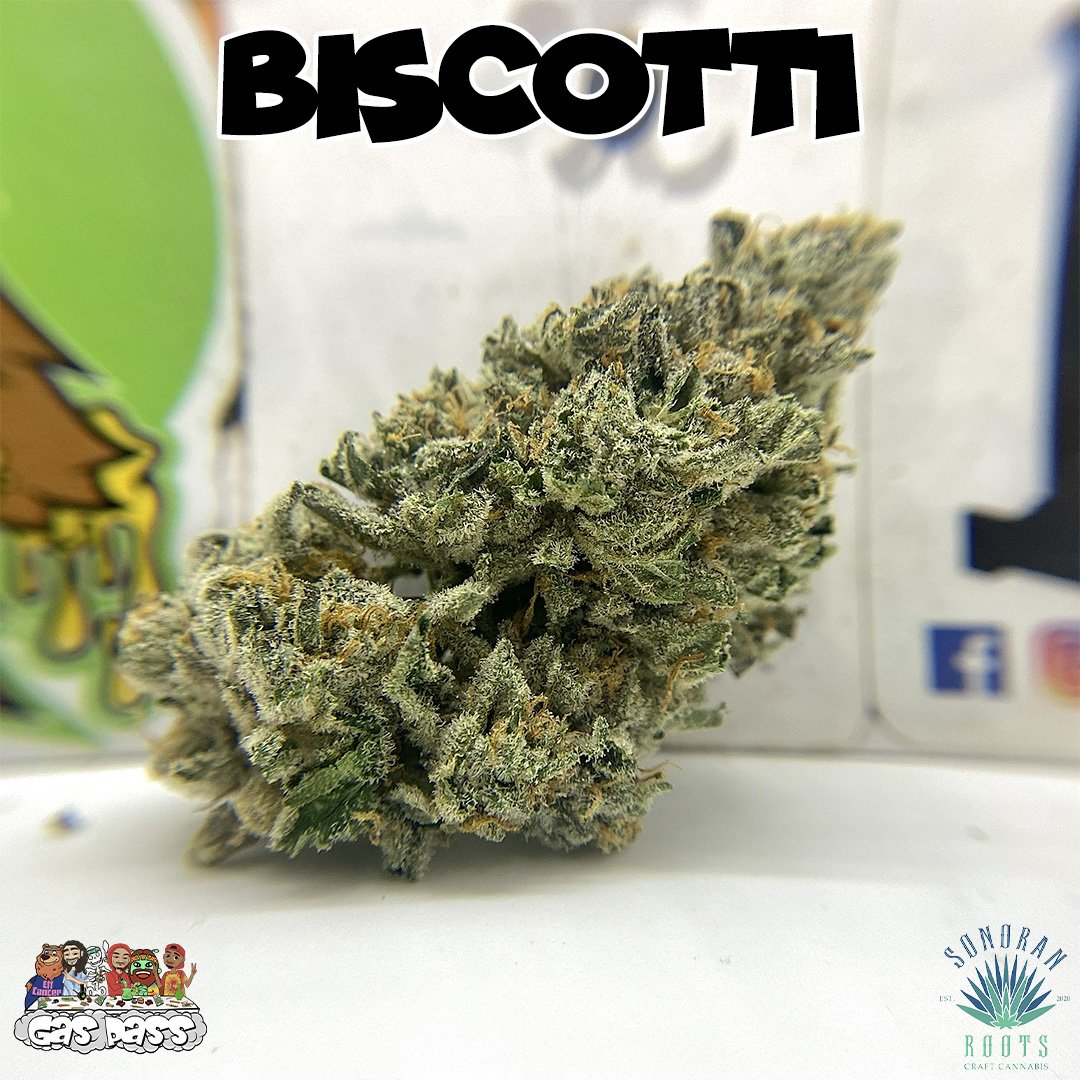 Biscotti is no stranger to the Valley and Sonoran Roots has entered the conversation. If I am not mistaking, we got our first true encounter with this strain when Connected introduced it almost a year ago. Or maybe it was Tru|Med that first dropped it out here. Either way, it looks like I have some questions that need answered myself or, maybe the fact that I do not remember means neither one made a lasting impression on me. That does not equal me saying that none of the two were bad. I am just saying they that neither one of them were a home run. Sooo, let’s talk about the Biscotti that Sonoran Roots grew.

Biscsotti is made up of what I would call a hat trick of strains. Its lineage consists of GSC (Girl Scout Cookies), Gelato #25 and Florida OG. It is said that Biscotti was bred by the Cookies Fam but, I really do not want to be quoted on that. However, I am sure someone from the cannafam can answer this question for me. There is no arguing that this Biscotti had some amazing bag appeal. The buds were coated in a heavy blanket of trichomes which made their presence even more elegant. Their structure was pretty nice and the size of the nugs were consistent throughout the entire 8th. I can for sure give this strain a 5 in the looks category.

The smell started off ok. Just like strains I’ve gotten in the past from this particular dispensary, it smelled a lot like plastic as it was in the tube. Once I removed the buds from the container and started to break them down, I could noitice hints of minty Gelato and that was really it. I did not notice anything more than the scent of fresh mint and Gelato. The smell wasn’t strong or as some would say, “loud”. However, it was strong enough to get my attention for sure. I could honestly give this strain a 3.5 in the smell category.

The taste was very pleasant from the spark. If Sonoran Roots is consistent ini any category it is the flavor. Right off the bat I got hints of sweet and fruity cream. The strains that immediately came to mind were Gelato and Kush Mints. Leaning more towards the sweet side than creamy however, if we are comparing the taste to Gelato or Kush Mints. The sweetness this strain gave off truly reminded me of the blue pack of Skittles candy. If I were to compare the strength of the taste to the Galactic Runtz or the Half Pint however, then this Biscotti could be better in my opinion. The flavor was nice yes but, not nice enough to get a 5. Therefore, I can not give this strain no more than a 4 in the flavor department.

The high as well could have been better. Especially for a strain they consider premium shelf, I would expect it to pack a premium punch. I am not saying the high was absent at all. I am simply saying that it was not up to par with the price point. It is packed with a nice and mellow high that starts off in the head. This is where I would say the eye of the storm was. By the end of the blunt the high was mostly a heady one than anything. However, I did feel the effects of the strain in my body. As it was left completely relaxed by the time I was finished smoking. All in all I would give it a solid 4.5 in the high category.

In conclusion, I strongly feel that Sonoran Roots did not meet the standards with this round of Biscotti and did not earn its Gas Pass. This to me is another example of a strain placed on the wrong tier. I could agree that if it was a tier lower then, the scores would look completely different. I do not know how these grows determine what tiers these strains get placed on the shelves or if thats something the dispensary does. For what it is worth, I think they should implement a way to test the quality before making that decision. At the end of the day I can say that if you are new to the exotic scene, meaning you are deciding to spend a little more than you normally would on your flower. Then give this Biscotti a try and let us know what you think via Instagram.