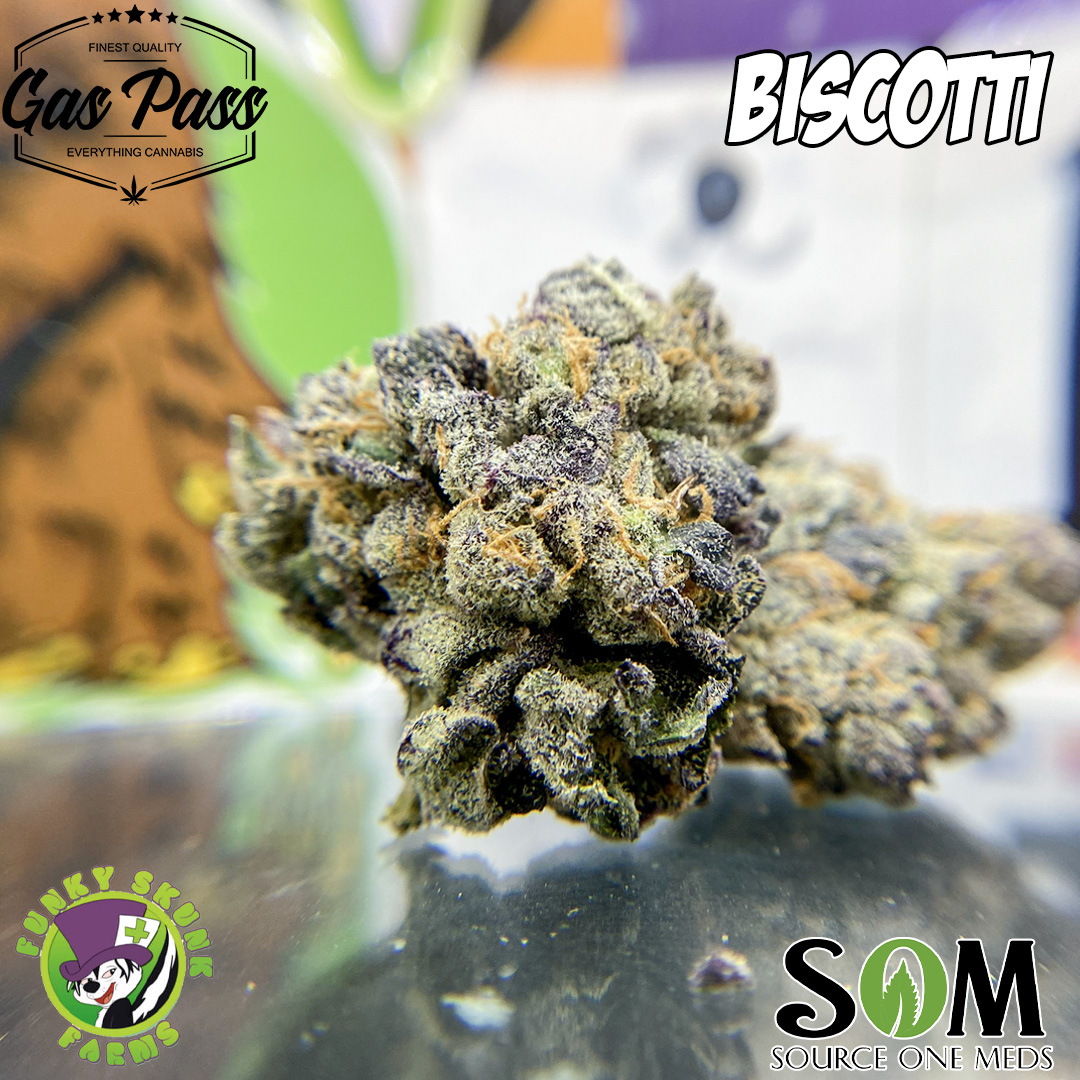 Biscotti (by: Source One Meds)

Biscotti (by: Source One Meds)

Source One are the”new kids on the block” who recently made their introduction to the valley just a few months ago and pride themselves on being an insource company. I mean why would you not when your final product is above average, and powered by Funky Skunk Farms. I got to try their recent batch of Biscotti has to be one of the best out of the very few. Sooo, let’s talk about it!

Smothered in trichomes, there is no denying that this batch of Biscotti was an eye catcher. What made this Biscotti different from the others were, dark purple hues that stuck out like a sore thumb. I also couldn’t help but notice the fire orange hairs that also gave the buds a little more flair. The greens that these buds possessed were hard differentiate from the trichomes because of how light they were. Out of the very few strains I have tried from Source One, I would have to say that the Biscotti by far is the best looking one out of the bunch, and has for sure earned its 5 in the looks and presentation category.

As I opened the pack I the first scent I was able to notice was gas. It was subtle but strong enough for me to notice and when I say gas, I mean the gassy smell associated with OG Kush. As I broke it down, the smell of Gelato was the next one I noticed. After breaking down about 1.8 – 2 grams, I wasn’t getting anymore from the smell than I was when I first opened up the pack. I was impressed however, by how well the buds were cured. They weren’t too wet or too dry and as I broke them down, it was easy but also had a nice stick to it. All in all, I could not see myself giving this strain no more than a 4 in the smell and freshness category.

As I rolled the blunt, I was praying I would get more in the flavor department than I did from the smell. I know that logic does not make sense but you can’t be mad at a dude for hoping. When I sparked the blunt, the first flavor I noticed was a very mild sweetness. To be exact, it was the same sweet taste you would get from a Gelato which makes absolute sense. As the blunt progressed, it the taste followed suit. What started off sweet now had a creamy addition to it but the creaminess was more of the savory kind. By the end the sweetness was the more dominant flavor out of the two and the flavor did not intensify as I was hoping. I could not give this run anymore than a 3.5 in the flavor category.

The high is where things got real because by the time I was done smoking I was in outer space. I would say it only took about two to three puffs to start feeling the effects. What started off in the face was a warm and fuzzing feeling that slowly made down to my feet. It felt as if I was floating by the time I was done and it wasn’t until hours later when I started to feel “normal” again. What this strain lacked in flavor and smell was definitely made up for by the high. I wouldn’t say it made things all better but, it made things a lot better. It was for sure good enough to get a 5 from me.

Truthfully, this round of Biscotti would be my third one from three different cultivars. Based off my experience with all three, I can’t really say that anyone of them were good enough to make an everlasting impression. I don’t even think I would put Biscotti on the premium shelf after taking all things into consideration. What I will say is that if there is any brand who has a Biscotti that I have run into and felt that it was priced correctly, then it would have to be this round I got from Source One Meds. Even though this strain did not get all 5 and even one 3.5, for what the price point they offer this at I would definitely say it is Gas Pass worth.