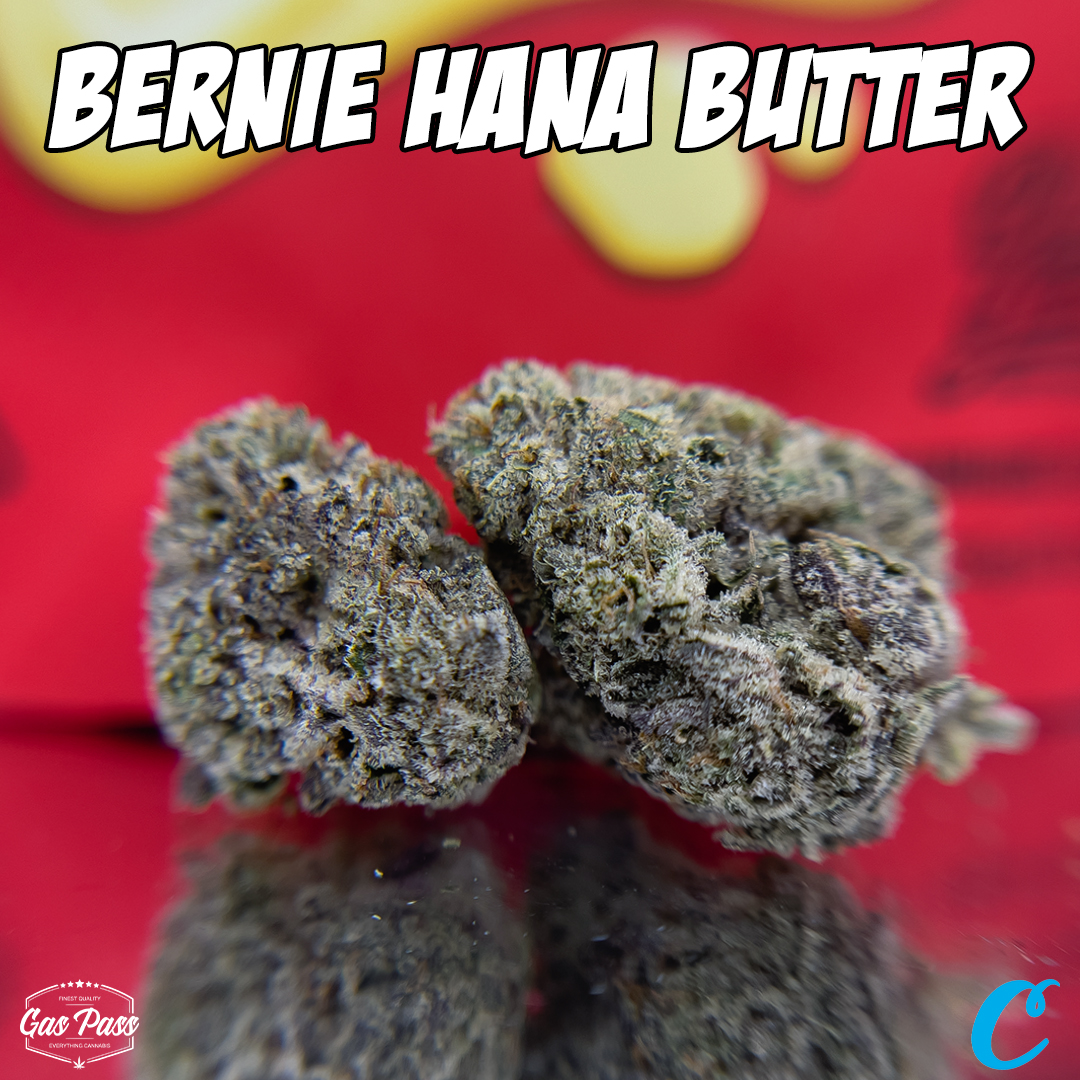 Dear Berner, I am writing to you as a true cannabis connoisseur. It is safe to say that I have been nothing but let down by a lot of your strains. I am pretty sure I am not alone on this one.. After giving your Bernie Hana Butter a try, I felt obligated to respectfully write you this letter. Because like a lot of the packs you put out commercially, this Bernie Hana Butter is not it. Sooo, let’s talk about it!

Like many of your strains, I can admit the looks were amazing. It had phenomenal bag appeal if anything. However, a lot of your strains have great bag appeal. It is almost a given when it comes to any Cookies strain that;s out there. The buds were covered in milky white trichomes. Beneath the trichomes, the buds had shades of dark green and purple. Again, I could agree that looks wise this strain played its part. I can at least confidently give the butter a 5 in the looks and presentation category.

As I opened the bag, I was instantly met by a mixture of earthy and minty notes. It reminded me a lot like Cold Snap. It definitely was not what I was expecting but made sense coming from a Guava background. As I broke the buds down, I got very minute hints of dank and gas. When I say minute, I mean just enough of the scent to know it’s there. But not enough to get the excitement going. For what I pulled out the bag, I was expecting better in this category. I am not even bothered by the smell itself but more about how faint it is. I could only give the butter a 3 in the smell and freshness.

The taste was just as disappointing as the smell and just as little to non-existent as well. I figured that after getting about half way, the flavor should pick up. Maybe it was more hoping than wishing. Either way, what I hoped/wished for did not come true. Throughout the entire blunt the flavor was watered down and almost non existent. I won’t lie, that bummed me out quite a bit. I didn’t think things could get any worse from there. Boy was I wrong. Anyway, for the flavor I had to give this a 2.5.

The potency was even a let down. I know you run a company that prides itself on quality. My question is, where is it? Why is it that out of 10 8ths, maybe 3 of them slap? At this point, a lot of us are asking ourselves what are we even paying for? Is it the name or the packaging because I don’t feel like it’s what’s inside the bags. I mean this with the utmost respect when I say you have to do better. You put so much time and marketing into gassing these strains up. The least they can do is hit like some exotics, even if it’s just a little bit. With that being said, I have to give this strain a 3 in the potency.

If you look at the scores, you can clearly see that this strain did not earn its stamp. It’s unfortunate too because I was really rooting for this strain. I loved everything about this strain except for the actual weed itself. Which is a common characteristic for almost everything I have bought for you. As a connoisseur and someone who watches you take the pride you do in your product. I must ask, where is the weed your marketing on your pages. What we see and what we get feel like two different things. Your stuff costs a good amount of money for every batch to smoke as mediocre as they do. I am hoping that in the future as you look to expand you also look to fix the quality of the meds.