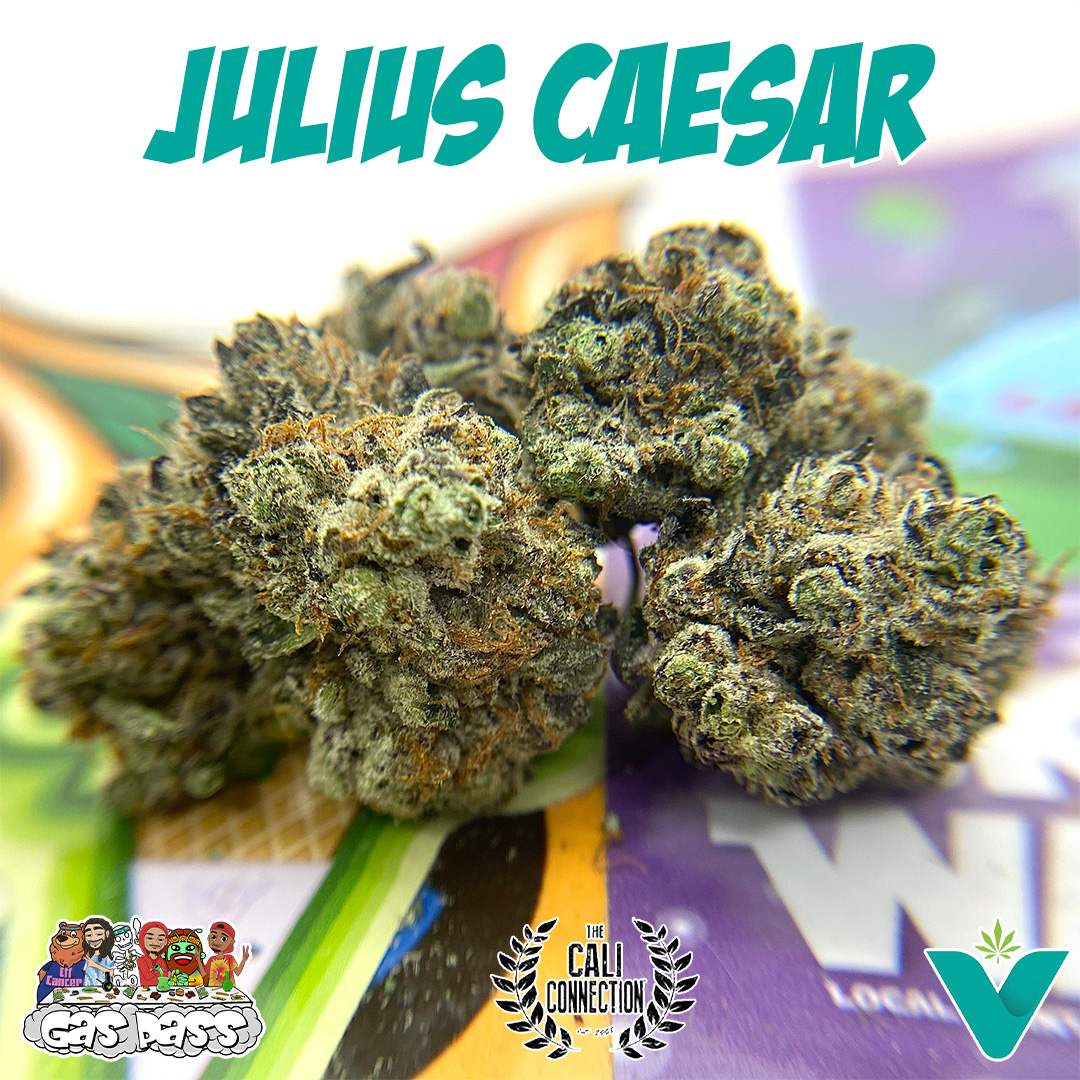 Julius C has to be one of the most nostalgic strains I have ever put in my body. Smoking this strain took me back at least a decade. This was the time when grams were $20.00 – $25.00 depending on the strain. Seeing as there was usually only four of us that managed to scrape up enough money to grab a gram. That was something we only did on special occasions. You better believe that I was counting how many hits each person took along with how much money they threw in. I was getting all of mine no matter what! Luckily, times have changed and I am no longer relying on the homies. Sooo, let’s talk about this Julius Ceaser shall we.

This being my first go with this strain means that my level of excitement was through the roof. It only grew as I got my first glimpse of the nugs. There is no denying that the cultivar took their time with this strain. Just based on the looks alone I could tell I was looking at something special. The nugs were dense and solid purple. The only light my eyes could detect was the light from the sea of trichomes the nugs possessed. What I was holding felt more like a jewel than something I was supposed to roll up and smoke. Looks wise, this strain was more deserving than the 5 we are able to give it.

The smell is where the nostalgia started. From the moment I opened the container I could smells purps. It had the sweet and grape, Grandaddy Purp like notes that made my eyes roll to the back of my head. As I broke it down, I was not only amazed by how fresh the buds were but, blown away by how much more the smell grew. My entire house smelled like a grow room of purp and I was in either heaven or the past. Either way, the smell was more than deserving of its 5.

The taste was just as good as the smell. The only difference is, it was extremely potent the moment I lit the blunt. With every hit my taste buds were blessed by that old school purp taste. Looking back at the lineage and comparing it to what I was getting looks and taste wise. It was hard to not think that this strain had at least a little bit of purp genes. Either way, the more I smoked the more I could not get enough of its flavor. I felt my heart crack just a little as I noticed the blunt coming to an end and even though that feeling was a bad one. The flavor of this run was more than good enough to get its 5 from me.

The high was the cherry on top for me. It wrapped the session up nicely and added a little something something to the finish. The focus point of the high was mainly in my head. However, after some time I was able to feel a wave of comfort take hold of my body. I was feeling warm, fuzzy and secure by the time I was done. Most importantly I felt a little more motivated than usual in my abilities. Those influences assisted me with putting together some of my best work. If this strain did one thing for sure, it was open up the creative side of me more than any other strain I have encountered. It was easy to give the high a 5 long before I was done smoking it.

I will never forget my first time with the Julius C. It was by far not only one of the most memorable strains I have smoked but most comforting as well. I hope to see this strain make its way to Valley sometime in the future. However, with the strain being as rare as it is, I feel you have to know someone to get your hands on it. Either way, if your wondering who grew or where to find this strain, feel free to reach out to us via Instagram or email.