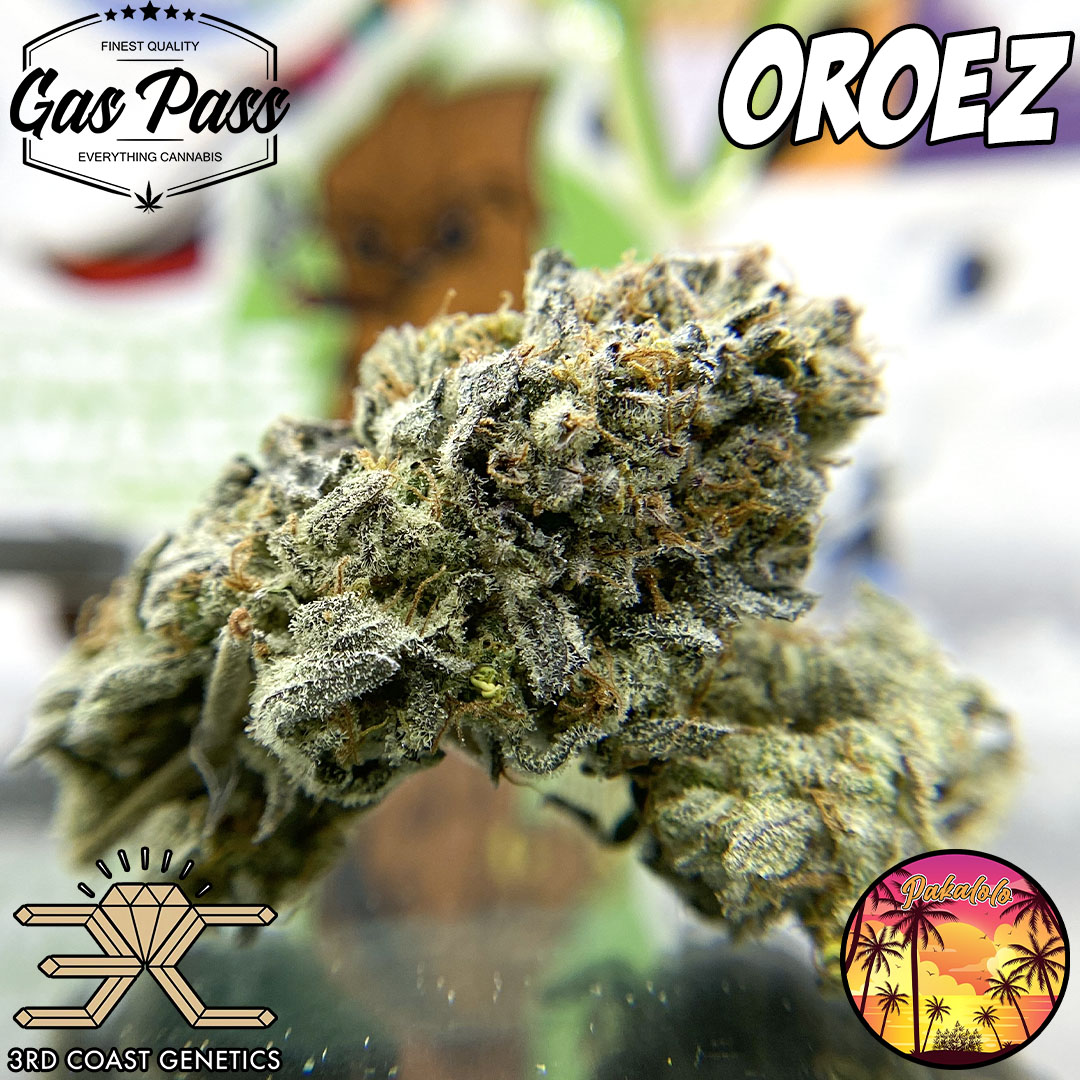 After a few rounds with the Oreoz strain, it is safe to say that this strain is all looks. The first encounter I had with this strain, was about a year ago. Steez and I grabbed an eighth from the Jungle Boys store out in Los Angelas. No longer than a couple weeks after that we were in Oklahoma City, and grabbed some from the Cookies store. My most recent run, was here in my home state of Arizona. It was grown by my good the very talented home grower, Pakalolo. Yes, this is a review mainly based on my experience with Pak’s run. However, you will notice me reference my other two experiences to help paint a picture. Sooo, let’s talk about the Oreoz shall we?

Oreoz is a cross between Cookies and Cream with Secret Weapon. I came to the conclusion that the Secret Weapons physical features were the more dominant in this particular pheno. My analysis came from the fact that the buds were mostly purple. I’m not saying that Cookies and Cream does not contain any purple. However, most of my encounters with the strain have consisted of buds that were mainly light green. The trichome coverage was absolutely stunning. All three phenos were dazzling in a heavy coat of trichomes. However, out of the three I would have to say that Pak’s cut was the heaviest. Really, out of three Pakalolo’s was the total package in the sense of looks and has earned a 5 from me in the looks and presentation category.

Now when Pak first gave me this strain, he informed me on how he was not happy with the smell. I took a quick whiff shortly after he gave it to me. Based on what I was smelling, I definitely agreed with Pakalolo. I felt the smell could have been a little stronger based on what I was looking at. However, after I got it home I let the weed sit in the open bag for about five minutes or so. After allowing the buds to get some air, I was definitely starting to get more from the smell. It wasn’t strong but I did notice hints of gas and savory cream. Breaking them down is where the magic happened. The air was instantly filled with a blend of sweetness and a Meat Breath like meaty fragrance. What started off as a 3 quickly worked its way up to 4.5 in the smell and freshness category.

The flavor was just about as potent as the smell first was. It was a very mild hint of cream but that is it. That seemed to be the trend with all three phenos. They all had little to no flavor. No matter how hard I searched I was not able to get no more than extremely subtle hints of cream. I was hoping that as I progressed the flavor would pick up. However, that was not the case. Throughout the entire course of my session, the flavor was no more than mild. I couldn’t give this strain no more than a 3.5 in the flavor category.

The biggest highlight had to be between the smell and the high. The high was pretty sedating by the time I finished. It started off pretty light and in the head. By the time I finished I was experiencing a full body high. I know I said it was sedating but at the same time it didn’t knock me out. It was more of a herbal muscle relaxer. I can safely say this strain earned a 4 in the high category.

After tallying up the scores, I also thought about my experience with this strain. Based on everything, I can not give this strain its Gas Pass. However, I can say that out of the three phenos, this one was the best. I know Pak wasn’t excited about this run. I am hoping he takes another shot at this strain whether it be in coco or living soil. I can for sure see and taste the potential and maybe with some adjustments, this strain can be better. At the same time however, that could be that strains full potential. Meaning, nothing more can be done to better the final outcome of this strain. Either way, I would be excited to see if anything more can be done.