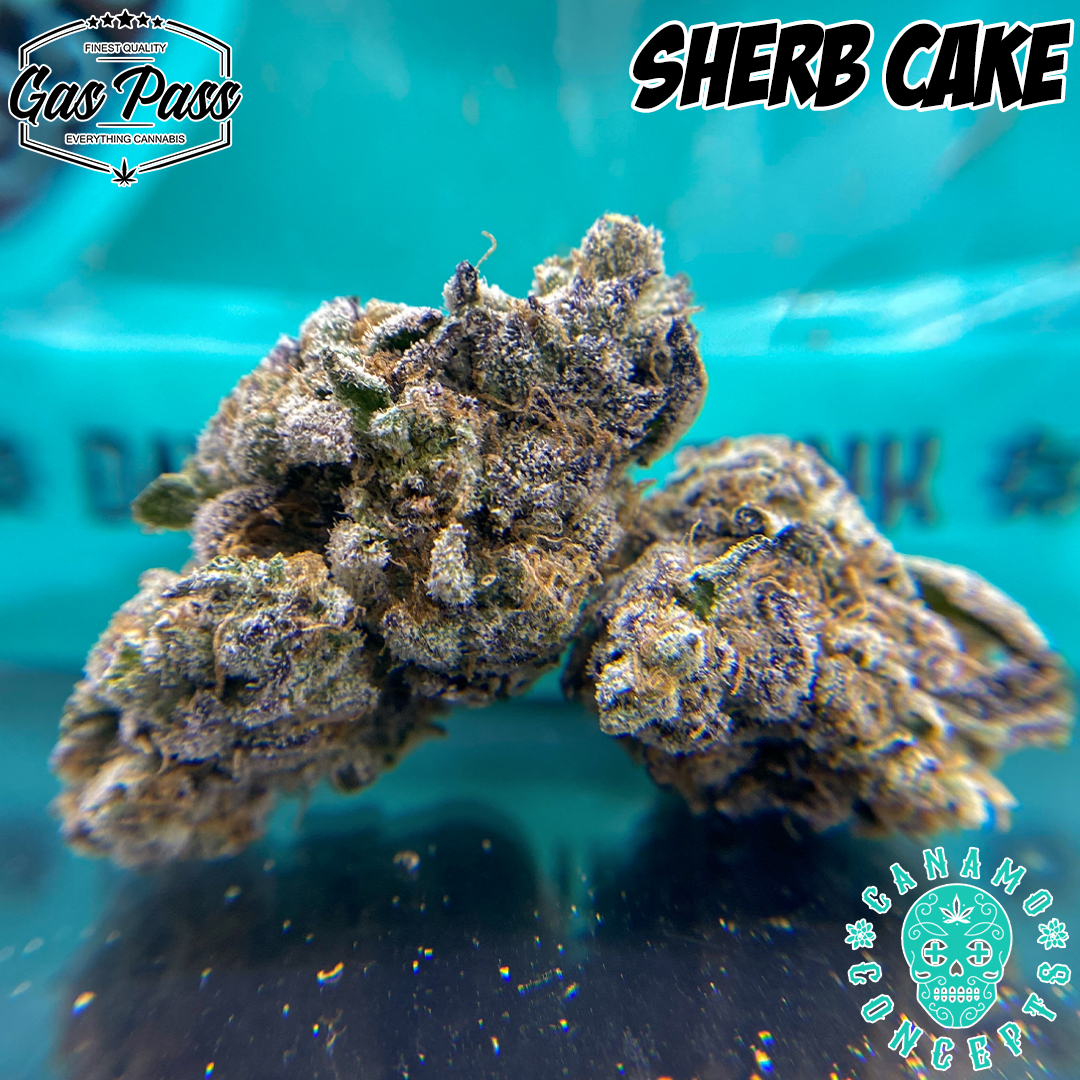 Personal opinion, Ponderosa has the best flower on the westside of Phoenix. I only say flower because that is really all I go for. They are one of the only dispensaries in the state that still offers “deli style” flower. They do also offer prepackaged flower as well. However, those who really know Ponderosa go for the deli style “Copper Top” strains. On the day I picked up this Sherb Cake, I noticed Pondy had these new pre-packs on the shelf. The packs were from Canamo which if you know you know. I decided to grab a couple of them and definitely grabbed some flower from the deli. The Sherb Cake was one of the two prepackaged eighths I decided to pick up so, let’s talk about it.

As I opened the package my nose collided with a sweet smell that reminded me of Zkittles. It was the kind of sweet you would or should I say could get from Runtz or Candy Kush. When I broke it down an explosion of sour gas came from the buds. It truly reminded me of those old school Cheetos commercials. The ones where, when the bag was opened the cheese exploded from the bag and got all over the person opening it. The smell was hypnotizing and there was no reason I could not give this strain a 5 in that category.

As I sat there and analyzed what was in front of me, I felt they were overqualified for the shelf they were on. Trust me, I am not complaining at all. That is actually one of the things I love the most about Ponderosa. I feel, they truly price the product accordingly. You can sometimes go in and get a steal like this beauty. Believe it or not, the Canamo packs cost less than the deli style “Copper Top” flower. If I am not mistaken, an eight of the Canamo packs are roughly $40.00- $45.00 before taxes. Imagine getting this pack for let’s say $45.00 after taxes. How would you feel about getting something as gorgeous as this in your pack? I give it a 5 out of 5 in the looks and presentation category.

From the moment I sparked my blunt the flavor was mouth watering. I truly felt as I was smoking a rainbow. Just like the smell the flavor was sweet and candy like. It reminded me more of Skittles candy than the Zkittles strain. With every hit my mouth watered more and more until it felt as if a lake had formed. There were times I noticed very subtle hints of cream, but the flavor mainly consisted of that fruity candy taste. I am not a huge fan of those kind of terpenes however, this was some of the best tasting weed that hit my tastebuds. I without a doubt could give this strain a 5 in the flavor category.

The high was the only thing that started light. Depending on who you are that may be a good or bad thing. I know some people like to feel the affects of their cannabis the moment they hit it. Others, like those creepers that hit you when you least expect it. Until about 3/4 of the way, the high was what I would call “decent”. Once I hit the 3/4 mark and beyond, I was toasted. I felt as if my brain melted for a good few hours. It was exactly what I needed at a time I could not turn my thoughts off and get a good nights sleep. By the end of my sesh, I was highly amazed by the way this strain had me feeling. It definitely earned its 5 from me in the potency category.

Truthfully, every aspect of this strain amazed me. As I stated earlier, I am not a huge fan of the fruity sweet strains. Yet, I found myself going back to Pondy for more. It was incredible from start to finish. The highlight of the entire sesh is not anything that happened during my time with this Sherb Cake. No, the highlight came long after the blunt was gone. It was not only the amount of junk food I ate. It was the spiritual moment I was able to have with my self and my ability to go outside and appreciate nature. The nap however, is what I will never forget. I am hoping to see this strain on the shelves again sooner than later.