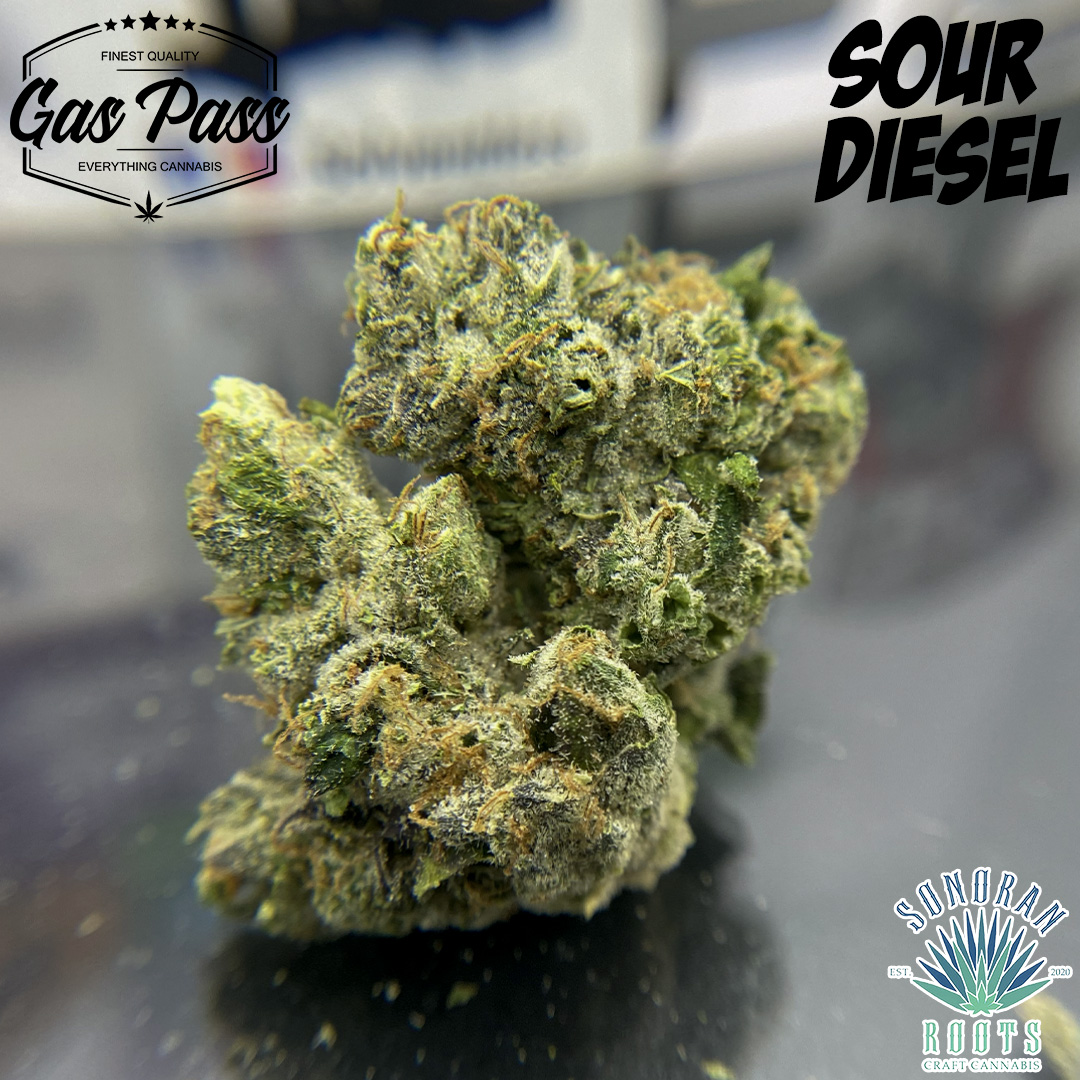 I remember the first time I smoked some real Sour Diesel. Before I even got it home, my mind was blown. You have to remember this was back in the reggie days. Smoking exotics was more of a delicacy and only happened occasionally back then. Before the sour, I never encountered a strain like it. It was so sticky we were able to stick the buds to the walls. The smell was so strong you could smell it from the parking lot as I approached my friends apartment. There is no denying that Sour Diesel has had a special place in my heart since that day. It only made sense to grab a batch from Sonoran Roots seeing as they have the reputation they do. Sooo, let’s talk about it.

As far as the looks, this batch delivered. It was heavily coate in trichomes. The buds were mainly bright green with orange hairs shooting out of them. From a glance, this strain looked a lot like GMO. What really made this strain stand out were the lavender like leaves it had. They weren’t covering the buds but, there were enough to give the buds a beautiful color pallet over all. I would easily say this strain deserved its 5 in the looks category.

Smell wise I was in heaven. As I stated before, this strain had a lot of characteristics that reminded me of GMO. There was garlic mixed with a little bit of sour and piny kush. The only thing that changed about the smell when I broke the buds down, was the level it was at. The combination of the different smells plus their potency, made me remember why Sour D was my first love. The smell of this batch definitely earned its 5.

From the spark the taste was pretty dull. However, I knew better than to get my hopes down. Some strains take a minute for the flavors to pick up. I have had strains take as long as 1/2 to 3/4 of the blunt for the flavors to kick in. Therefore, I let it do its thing. In doing so, I started to pick up on the sour terps. They weren’t heavy however, they were noticeable. As the half way mark came and went, I was expecting the flavor to turn up a notch. That was not the case, as the flavors remained dull and slightly noticeable. It stayed that way throughout the entirety of the blunt, which was a major. This was not the sour I grew up loving at least taste wise. I couldn’t help but give the flavor a 3.5.

The high this strain produced for sure could have done better than it was. I was hoping that the high would at least make up for the lack of flavor. Yet, it was no better than decent. Compared to other strains from this grow I felt this Sour D could have been better. Especially for being the classic that it is, it did not live up to its reputation high wise. For that, I could not score the high anymore than a 3.5 as well.

Although this strain did not pass for me, I can see how it would for others. Truthfully, I would have been happier if this was not priced at the premium price of $49.00 before tax. I am interested to hear what you all think about it, feel free to reach out via Instagram to talk about it. In the meantime, I am on the hunt for some killer Sour D.