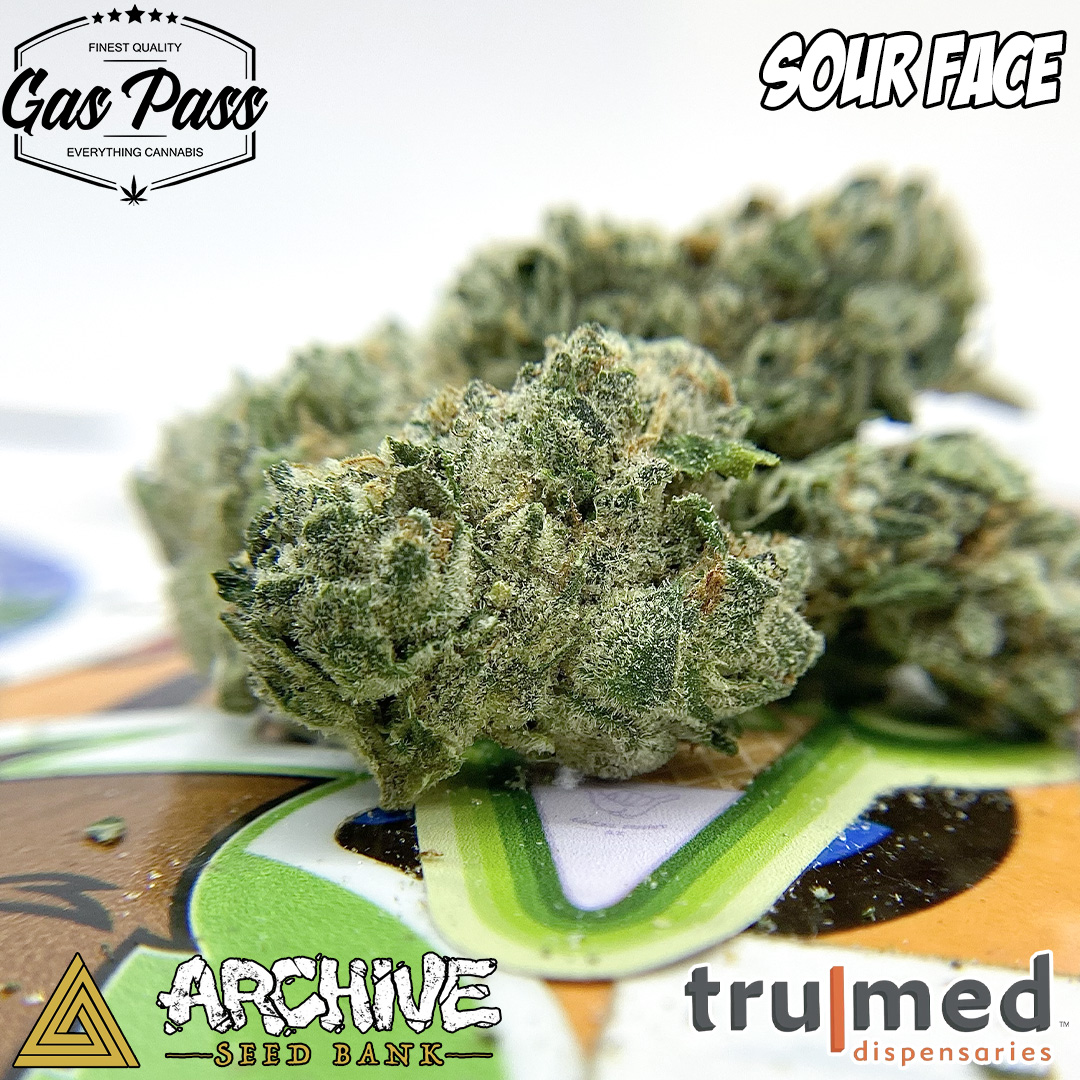 It is safe to say that I was more than excited when I picked this strain up. With parents like Sour Diesel and Face Off OG, I was thinking there was no way this strain would be a miss especially coming from Tru|Med. Sour D was one of the first “exotic” strains I smoked back in my early days of smoking. I remember how lifeless my body would feel afterwards and the super funky, long lasting and tongue staining flavor that came along with it. However, the overwhelming joy I was feeling as I drove home was gone with a quickness the moment I opened the bag. Sooo, let’s talk about this Sour Face which was bred by Archive Seeds and cultivated by Tru|Med.

Now I will not lie, this Sour did come looking its absolute best. Her vibrant greens were eye catching to say the least. She was heavily covered in trichomes which not only gave her a sense of elegance but, gave her a diamond coated look as well. If there wasn’t a nug jewel out there already, then this would for sure be my idea of what one would look like. Her beauty made it close to impossible to start the smoking process but I eventually came to terms. As I was breaking the buds down, I noticed how fresh they were. That made the process even more difficult and not because it was too sticky to break down. I just wanted to have that moment a little longer with her but I knew there was work to be done. I could for sure say she was a 5 in the looks and freshness categories.

As I opened the bag, the first thing I noticed were those gassy notes that only Sour D gives off. Not the East Coast Sour neither, I am talking about that West Coast Sour that I fell in love with the moment it first hit my taste buds back in the day. As I broke it down the faint smell of gassy earth became noticeable. I know what you are thinking, “Hip, if it had the smells you love what was wrong with it?”. It wasn’t what it smelled like but how strong the smell actually was. Having the reputation that Tru has, I was expecting my entire house to smell gassy like times before. That was not the case with this Sour however, the smell was very mild and disappointing to say the least. Smell wise, I could not give this strain anything higher than a 3 out of 5.

From the spark I couldn’t taste much. It did however, manage to manhandle my lungs as I seemed to cough with every hit I took. By the time I reached the halfway mark, I noticed that the flavor was still as dull as it was when I first started. I was definitely higher than I was expecting to be based off the taste and smell. As the blunt was ending, I was finally starting to pick up on the flavor more. It wasn’t anything significant but it was more than what it was when I started. High wise, I felt that i could be slightly higher for what this strain costed and what Tru|Med normally puts out. I feel that if they bring this back fully dialed in then it will be a force to be reckoned with. This round however, earned itself a 3 in the flavor and the high.

As I was writing this, I couldn’t help but wish that Tru has some kind of tier system. I am trying my best to understand these dispensaries pricing methods but I just can not wrap my finger around it. I truly do not feel that every strain Tru puts out is top tier quality. I know one thing is for sure, if they need help deciding what tier to put their strains on I would definitely lend a lung or two. All jokes aside I am hoping to see one of two things happen. Either, Tru|Med implements the tier system or really dial a strain in if they are going to sell it for full price. That goes for really grow/ dispensary in my opinion. It is time that cannabis is priced not only right but fairly as well.