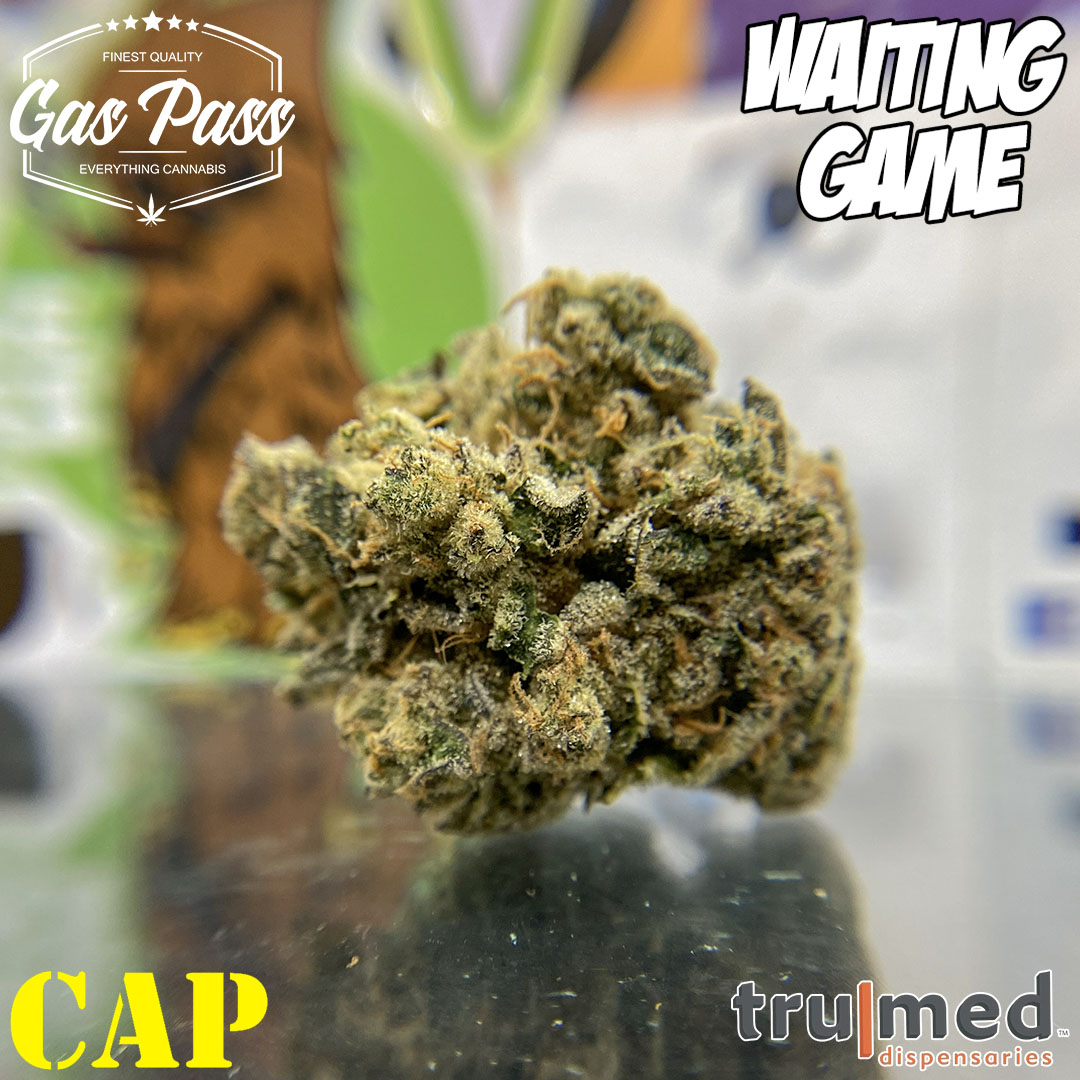 Waiting Game is another Capulator creation. It is a cross between Fruity Pebbles OG and MAC 1 which Cap himself also made famous. I feel that it is safe to call Cap the MAC God because this man is the king of MAC Crosses. Burnie Mac, Banana MAC and MAC and Cheese are a few that I have been able to try and you better believe I will have my eyes peeled for more MAC crosses by the Cap man. Let us not wait any longer, and talk about this Waiting Game shall we.

This may be the darkest I have ever seen any MAC or MAC cross. MAC is known to be extremely light in color from the buds to the trichomes. In fact, the buds are so heavily coated they almost look white.The Waiting Game was heavily coated in trichomes however, it had more of an amber tint to it. Even the bud structure was a lot different than what I am use to seeing from MAC. These ones were dense but still had a little squeeze to them. Unlike the regular MAC which takes a little finger strength to break down if you are not using a grinder. All in all, this strain definitely earned its 5 in the looks and presentation categories.

The smell was not for me. It reminded me of a Jack Herer or East Coast Sour D with a gassier presence. That was while the buds were in the bag. After breaking it down those nose tingling Sour D terpenes turned up a few notches. There was also this very distinct musty smell that one would associate with MAC. It is the kind of musty that makes it hard to breath a little. Even though I absolutely disliked the smell, I could still give it a 5 in that category. It would not be fair if I were to score it any lower due to my personal dislike for those smells.

When I lit the blunt and got my first true taste and I was highly impressed. The taste was nothing like what I was smelling. The first flavor I noticed were these sugar sweet terpenes that had a splash of Kush. Up until the midway point, those flavors were barely noticeable. Once I met and exceeded the midway mark there was a change in the flavor. I was now experiencing these almost purp like terpenes. The flavor wasn’t as strong as I hoped for but, was strong enough to notice. All in all, I scored the flavor at a 3.8 because I felt it could be a tad bit stronger.

The high to me had the effects of a well balance hybrid. It reminded me of those Haze and Main energy drinks. If you have never had one, imagine the effects you would get from a shot of medicated caffeine. You get that short burst of energy but it doesn’t leave you feeling jittery. In fact, it’s quite the opposite. You feel cool, calm and collected but you also have the motivation to get things done. That’s what I got from this Waiting Game and honestly I enjoyed, especially for someone who usually shops for “pure indicas”. Based on that, I can confidently give this strain a 5 in the high category.

As I looked at the scores, it took me a while to decide if this strain was Gas Pass worthy. I then thought about my experience, and based on that I can say yes. Even looking at the scores, the lowest on there is a 3.8 with the rest being all fives. Based on those scores and the price, you would say this didn’t earn its Gas Pass. Understandable, especially knowing what Tru|Med charges per eighth. I imagine that by the time this strain hits the shelf, those flavors will be dialed in. Until then, its a Waiting Game!